Chickens are one of the most abused animals on the planet

The number of chickens in factory farming who are suffering and dying every day is staggering. We take a look at the chicken crisis that’s exploding around the world.

This blog has been cowritten with our global farm animal advisor, Monica List.

Too big a problem to comprehend

There comes a point where the size of a problem does little to make it more potent. Climate change is a classic example – the vast, often-complex nature of our warming planet has been a big hurdle for those with the job of convincing policy makers and the public at large that we face a genuine emergency.

And the same effect can be seen with animal welfare, specifically, chickens and other factory farmed animals who are suffering daily. The story of a single suffering creature always seems to motivate people in a way that tales of mass suffering always seem to fail to do. It makes sense; our brains are hard-wired to prioritise stories over scale.

The scale of suffering for factory farmed chickens

The scale of suffering is important to us as animal welfare campaigners, showing us where we can improve the lives of the greatest number of animals. And there’s no better example of suffering at scale than the factory farming of chickens (perhaps with the exception of fish and shellfish, but that’s for another day).

Let’s be frank; industrial chicken production is one of the biggest causes of animal cruelty in the world.

The problem for the modern chicken

When we talk about meat chickens, we mean the cookie-cutter, white-feathered ones who teeter around on legs that can barely take the mass of their immense breasts.

These animals have been genetically ‘tuned’ to maximise weight gain at all cost. And it’s a hefty cost that these animals must pay, in the form of painful lameness, skin lesions, leg fractures, breathing difficulties and even heart failure.

These animals are only 40 days old when they’re slaughtered and consumed – still just babies, not that you’d know it to look at them.

And the houses in which these giants are reared add insult to injury. Factory farm conditions for these animals are extremely poor.  The barren sheds are stuffed full of chickens and provide little to keep these naturally curious, playful animals from abject boredom.

Rest is a constant challenge, as most sheds don’t provide more than four hours of ‘darkness’ at a time. And for most of the time, the chickens are bathed in harsh artificial light and crammed in alongside tens or even hundreds of thousands of other chickens.

Imagine being forced to gain an unhealthy amount of weight while spending your whole life in a poorly lit, window-less, cramped, unfurnished flat with nothing to do. Not fun, right? It would be quite a job to design a less appropriate house for a living, breathing, feeling animal.

We’ve both seen these kinds of sheds in person and it’s a shocking sight. Imagine an undulating carpet of white, coupled with a constant din and smell of ammonia that’s hard to forget once you’re back in the fresh air.

Chickens are suffering on an unparalleled scale

If you could observe the life of just one of the chickens in a shed, you’d likely be shocked. Now take that suffering and multiply it by 40 billion. This is the number of chickens that are grown in factory farms every year worldwide. And that figure rises to 60 billion if we include those chickens that are likely farmed to higher welfare standards.

So for every human on the planet, there are nine chickens. Talk about being outnumbered.

And it’s not evenly distributed, with some countries consuming more than their fair share. A typical US consumer, for example, is eating a whopping 90lb of chicken per year. That’s around 15 large chickens.

One of the largest consumers of chicken, China, may be about to eat a whole lot more as the rising occurrences of swine flu is driving consumer demand from pork to chicken meat.

Researchers have suggested that “one of the most enduring marks of our impact on Earth will be the sudden appearance in the fossil record of copious chicken bones.”

The size of the chicken industry may even be underestimated. Writing in the journal Nature, Stanford academics recently used machine-learning techniques and high-resolution images to identify factory farms in a single US state (North Carolina) and then compared their results to the existing inventory. The authors identified 589 additional poultry farms, which represents an increase of 15%.

The opportunity for impact

With such a huge problem, we have an amazing opportunity to positively transform the lives of billions of animals. The solutions are already available; healthier chickens raised in sheds with more space, natural light and stimulating features such as perches and hay bales. These farms can keep these inquisitive, lively animals healthy and active, and must become the new global standard for chicken production.

It's time to change for chickens

We launched our Change for Chickens campaign in 2016 to challenge some of the world’s largest food companies to improve their animal welfare policies.

Though our work and the efforts of other groups, we’re making progress. Forward thinkers from all parts of society are coming together to say, “enough is enough”, and over 100 companies have now committed to improving the lives of chickens. 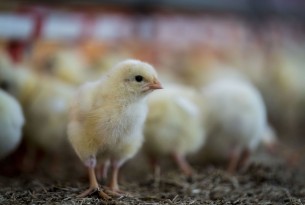