To remember the people and animals that lost their lives and commemorate those that were there to help, we’ve interviewed Gerardo Huertas, our animals in disasters director

At 7:59am on December 26, one of the biggest under-sea earthquakes in recent history struck off the coast of the Indonesian island Sumatra. Releasing the same energy as 23,000 Hiroshima-type atomic bombs, the ocean floor quickly rose by as much as 40 metres and sent several 30-foot waves hurtling onto the coast of Banda Aceh.

There was little hope for people and animals near the coast. The waves swept away everything in their path, causing catastrophic damage. Nearly 230,000 people and thousands of animals were killed, making it one of the deadliest disasters ever recorded.

Many animals felt the vibrations and ran for higher ground, but countless others were left injured, starving and stranded. Our teams rushed to India, Sri Lanka and Thailand to provide urgent veterinary care, carry out rescue operations and set up mobile treatment clinics. We helped the most animals in Sri Lanka as our operation was ongoing for nearly two years after the disaster. In total, we helped 117,548 animals affected by the tsunami.

Gerardo, where were you when you heard about the Indian Ocean tsunami?

I was at home in Costa Rica, resting from a busy year of working in Latin America and the Caribbean, helping animals affected from other significant disasters such as hurricanes and flash flooding. The Indian Ocean Tsunami was 10 times larger and it happened during Christmas holidays - as major disasters usually do.

How long after the tsunami did you get there?

We flew in about 10 days after the tsunami. We sent a team to Thailand, another colleague went to Indonesia and my team went straight to Sri Lanka, making a stop at our London office first.

Our CEO requested that we (we were known as the World Society for the Protection of Animals then – WSPA) led the work in Sri Lanka. The experience we brought and the systematic approach proposed convinced other NGOs to follow our lead. We coordinated with other organisations by ‘gridding’ the worst hit coastal areas and dividing the grid amongst the NGOs according to their capabilities. We also worked with the Ministry of Health and with UN rescue/relief authorities.

When the crew on the flight to Sri Lanka heard about our mission, they gave us crayons to give to the surviving children. It showed that people wanted to help in whatever small way they could.

The airport at Colombo was chaotic. As soon as we arrived we set veterinary teams, vehicles, equipment and veterinary medicines and drugs to cover as much terrain as possible. The traffic was awful, and the different rescue and relief efforts going on struggled to get where they were needed. Every day we got stuck in queues on narrow roads, sometimes up to five hours long each way to get to the affected areas.

A cow on a tsunami ravaged beach in Sri Lanka

What damage did you see?

An elderly man told me he knew something was wrong when he saw a cat running up a hill, being followed by a rat. When he saw that, he started running too.

The more domesticated the animals, the less they felt the imminent danger, so pets and cattle had no chance.

The first wave was not as high as in Banda Aceh, but it was very deep and destroyed everything in its path. The following waves swept everything away. Up to a kilometre from the beach was utter devastation. Buildings were reduced to very small debris. Railroads were twisted like spaghetti. Rescue and recovery teams were still searching for bodies. It looked like the inside of a bloody blender.

As with every large island, there are few people who know how to swim. But that wouldn’t have helped anyway. In fact, when the sea pulled back many people walked into the enlarged sand beaches to watch what was happening. There was no culture of preparedness against tsunamis. Thousands of people and animals, especially pet dogs and livestock living by the shoreline, were killed.

All this chaos was alternated with spots left untouched by the waves and currents. It was almost spooky how peaceful the ocean looked every day after.

What help did we provide?

My role was to coordinate our operation and to lead the coordination with the other NGOs. We initially worked with the UN, then the Ministry of health at that time in charge of rabies in dogs. Eventually worked with other NGOs such as American Humane Association and Four Paws.

First of all, we surveyed the entire coast to assess impact on animals. Many animals had perished, and their bodies had been washed away. The survivors had wounds and injuries, mostly caused by debris in the water striking them. Dogs, cattle and other animals were quickly treated by our vets.

The other part of my role was speaking to the government about the rabies scare that the international media had produced. The government of Sri Lanka announced that, in an attempt to prevent the spread of the disease, they were going to mass cull surviving dogs.

We denounced this plan as cruel and ineffective in two press conferences. We convinced the government this was not the best way to tackle the disease, and organised teams to vaccinate 20% of the dog population and carry out sterilisations. This quick and persuasive action saved many dogs.

Learn how our work contibuted to the elimination of rabies in Mexico.

After that, we funded and built mobile clinics to give urgent veterinary care to injured animals. They travelled up to 200km and treated up to 250 animals a day across the island. We mostly saw dogs, but also cats and livestock that had been affected.

After a disaster like this, parasites spread quickly and animals can catch diseases like mange. We helped tackle this by providing de-wormers, anti-parasitic treatments and anti-biotics to animals.

I was there for a couple of months, but there were members of the World Animal Protection team there for nearly two years, working on spaying and neutering programmes with local vets and the mobile clinic.

Can you recall specific animals that you encountered?

We treated a lot of dogs – the survivors were injured, confused, and hungry. They were very happy when we fed them and showed them kindness. I was relieved we could protect them from being killed.

During the relief operation we worked very close with a local veterinarian, Dr Nalinika. She told us about how she was led by her dog to a hill over a field, which was just a metre above the waves that completely surrounded it. Both remained there for most of the day until they were rescued.

While working with livestock, I saw a nearly completely white Holstein cow. I asked my veterinarian friend if it was an albino, but after examining it, he said, “it’s very old - it can hardly move due to arthritis. We’re just not accustomed to seeing dairy cattle reaching that advanced an age”.

I had never seen Komodo dragons before, either. Apparently, their bite is one of the deadliest in the world given the types of bacteria they can inject in your bloodstream, and that can kill you very quickly!

What are your strongest memories of that time?

I remember thinking how terrible it would be if the government mass culled surviving dogs based on a rabies scare produced by the international media. We fought hard to prevent it and it was a huge achievement that we did. It made me realise how dangerous the media can be in producing scares and making people and governments panic.

The initial coordination sessions with other protection agencies was difficult – it was like herding cats! And it was difficult to reach some areas. We were never able to fully cover the area of the island covered by the Tamil resistance due to the ongoing armed conflict with the Sri Lankan army.

Interestingly, elephants felt the vibrations through their legs’ infrasound receptors and disappeared into the bush. Only after a month did the elephant herds move back to the coast.

How did this disaster compare with others?

As with all major disasters, coordination and logistics (getting things sorted with accommodation, transport, equipment, medicines, veterinarians, fuel) was very challenging. It was chaotic in the capital and the completely overwhelmed inroads to the affected areas of the coast made things even more challenging.

This tsunami and one or two other disasters will never leave me. I will always remember how many people died and how horrible it was to see so many dead animals. We were pretty tired and spent after this one. It was hard to see such devastation and know so many people and animals had perished.

What did you learn, feel, think, conclude as a result of your experience there?

To get the vet medicine we had to work in terrible conditions - endless hours on chaotic roads, hot environments and difficult logistic overall. After, our team need time to recover from such an exhausting operation.

As always, locals welcomed us with open arms as we treated their valuable livestock their loved dogs as the only way to stop their mass poisoning.  Not once did anyone local doubt our mission – not for a second.  Animal owners see people coming to help and treat their injured animals as angels. That’s what they say in every disaster we go to.

Learn more about our work protecting animals in disasters 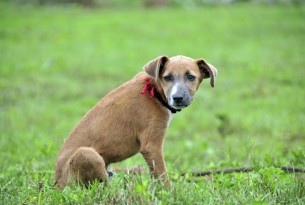 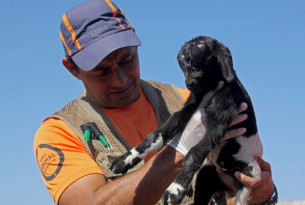