McDonald’s fails to serve up happy deal for chickens

Iconic food brands like Burger King, Starbucks and Subway are improving life for chickens but a recent announcement from McDonald’s shows that it still has a way to go to keep up

When it comes to raising animal welfare standards, fast food isn’t the first place you might look for leadership. Convenience, price and lack of consumer interest are common excuses used to sidestep the pressure to raise farm animals more responsibly.

But the ice has been thawing in recent years, and one company in particular – McDonald’s – has been a pioneer in some markets. Step into a UK McDonald’s restaurant, for example, and you can order a burger from a grass-fed cow or free-range egg McMuffin to go with your organic coffee.

I don’t doubt the sincerity; in my role at World Animal Protection, I've had positive conversations with McDonald’s on the strong business benefits for improving animal welfare.

But not all McDonald’s meals are so happy, with chicken being a prime case in point. A lack of proper policy has meant that your chicken burger or nugget likely came from an animal that’s been bred to grow at breakneck speed, reaching slaughter weight in just 40 days, and grown in a cramped, barren warehouse.

Painful leg, heart and lung disorders, skin lesions, stress and early death are all on the menu for a factory-grown chicken.

So I was initially thrilled to get the news in my inbox last week that McDonald’s has committed to give better lives to chickens. And there’s some pretty good stuff in the detail: by 2024, the company says that 70 percent of the chickens in its global supply chain will have enrichments such as perches and pecking objects to promote important natural behaviours and improve the animals’ mental and physical wellbeing. Furthermore, an improved pre-slaughter process (in the US and Canada at least) should reduce the amount of stress that the animals suffer at end of life.

But here’s the problem; there are a host of improvements that McDonald’s is avoiding, such as giving chickens more space to move (a typical factory-grown chicken will almost certainly have a floor space smaller than an iPad) and using healthier breeds.

Instead, the company is promising to carry out more research. But more research alone won’t cut it; we need clear leadership and specific commitments to help poultry producers and breeding companies scale up faster.

The reality is that we already know what a chicken needs to live a decent life. This includes: proper space to move; natural light; a varied, stimulating environment; and, crucially, to not inhabit a body that’s been bred to such extremes that it can be impossible to even support its own weight. This doesn’t seem like too much to ask.

Thankfully, a growing group of companies agree. Over the last year or so, iconic brands including Burger King, Starbucks and Subway, have all signed up to a clear, simple list of science-based asks, which have been developed by the world’s foremost animal organisations, including us.

The commitments will make a profound difference to the lives of billions of chickens.

Indeed, on the very same day that the McDonald’s news hit, global food giant, the Kraft Heinz Company, joined the group of forward-thinking companies in committing to meet our asks. Momentum is building and most companies don’t want to be left behind.

I look forward to the day when McDonald’s joins that group, which is surely only a matter of time. For the moment, it’s a case of “a good start, but must try harder”.

We’re also urging KFC to improve life for millions of chickens in its supply chain. Sign our petition now. 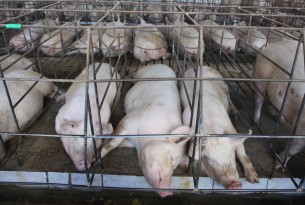