Exposing the suffering endured by caged meat chickens is not easy. Gaining access takes lots of planning and persuasion. Once inside, we were horrified by what we saw

You can’t just walk into an industrial chicken farm.

To get inside, you need to work out which farming methods are used where, decide which locations to focus on, and then work on being invited on to the farms to film.

Our goal was to document the suffering we see in these systems so we could use the information gathered to help create large-scale change through our new campaign, Change for chickens.

It was a long, difficult challenge where lots of things changed quickly. The one constant was the horrendous suffering endured by the chickens at every farm we visited.

We filmed birds with bare, red raw skin sores from sitting on the hard plastic flooring in the cages. Some were forced by the confined space to stand on the swollen and rotting carcasses of their dead cage-mates. In some cases, dead chickens hung from outside the cages. There were even decaying bodies lying on the manure conveyor belt which goes underneath the cages to collect the faeces as it drops through the hard gridded floor.

The noise of the birds, vents and fans, and the horrendous smell of the chickens’ waste is overwhelming. Conditions were so harrowing one of the team almost vomited, saying it was the worst animal suffering they had ever seen.

At one location there was a 100-metre-long warehouse flanked on either side by dark, barren cages three storeys high. We were told around 60 birds died every day.

Half of the birds had gone for early slaughter, so the cages at the top were empty, except for one lonely live bird. The birds in the cages below waited to follow the others to slaughter.

What we witnessed was pitilessly efficient - the automated systems take care of manure, ventilation, food and water - but they are neither clean nor humane.

All three caged farms we visited were contracted to two large poultry producers - one was trying to access the European Union consumer market.

Why we need to act now

While these cage systems are not permitted in the European Union (EU), many countries, including Turkey, Russia and China, use cages to farm chickens for their meat. Although not being allowed in the EU, European companies such as Big Dutchman are still manufacturing them for sale and promoting them in countries where they are permitted.

We’re concerned that the use of cages in countries where they are not banned will only grow as companies fight to produce more and more chickens faster and cheaper.

Because of the severe suffering that chickens endure in cages, we believe these farming systems have no place in farming.

Even if you live in a country that doesn’t use cages, this is a global problem, which we can change. We can stop this from spreading.

McDonald’s have already told us that it does not use meat chickens from caged systems.

We can stop the spread of caged systems now. Sign our petition now and urge these iconic food brands to keep caged chicken meat off the menu.

Please note: This first-hand account has been written by one of our investigators. Due to the risks involved in exposing the conditions on these farms, we have chosen to protect their identity. 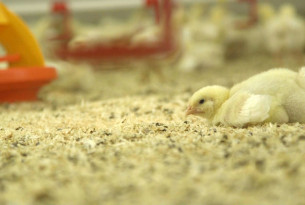