In the last few days, the internet has abounded with claims the secret blend of 11 herbs and spices behind KFC's fried chicken empire had been inadvertently revealed to the world.

There has been rampant online and media speculation that one of the most legendary and closely guarded secrets in the history of fast food has been exposed.

The secret herbs and spices have captured people’s imagination for many years. Take these away, and what do you have left? Chicken. And where does that chicken come from? Well, that’s the real secret. We don't know.

The plight of meat chickens around the world is not known or understood by many people. We tend to be aware of welfare issues surrounding laying hens, but we need to do more work for people to understand the suffering that takes place in industrially farmed chickens raised for meat.

A short and unnatural life

For most of us, we imagine chickens running around freely, pecking, scratching, stretching their wings. This is normal chicken behaviour. But that’s not how billions of chickens are raised before they become meat on our plate.

It would shock most people to know that under intensive farming methods, a meat chicken will live less than six weeks before slaughter.

Genetic selection means they grow so fast that their bones, hearts and lungs cannot keep up. They squat in dirty litter because their legs hurt or are deformed. Deaths from heart attacks or swollen hearts that cannot supply enough oxygen to their oversized breast muscles are also common.

The intensively produced meat chicken is typically kept in an artificially lit shed of around 20,000-30,000 birds. This means our typical Sunday roast chicken will have more room in the oven when dead than it had to live in being raised in an industrial shed.

In many industrial sheds, there’s no enrichment, no natural light, no room to scratch, peck or spread your wings. Chickens will mostly sit in their own faeces and then get ammonia burns from doing so.

An industrially farmed meat chicken is an unnatural product, created so that it is no longer recognisable as a naturally bred chicken. It is hidden from view and does not have a life worth living before it becomes meat on your plate.

Find out where your chicken's from

We’re not advocating that you shouldn’t eat chicken. It is after all, one of the world’s most popular meats. What we’re asking is that you care about where the chicken on your plate comes from. Chickens are animals before they become meat and should have a life worth living, but billions of them don’t.

Is the chicken you’re eating – whether it’s made from 11 secret herbs and spices, in a stir fry, a burger or an enchilada – humanely produced?

In the next few weeks we’ll be launching a new campaign to help you understand the issues better, so you can make an informed choice about what you’re eating and take a stand for the billions of meat chickens suffering in secret worldwide.

Watch this space for more details soon. In the meantime, find out how we're working to protect 70 billion farm animals. 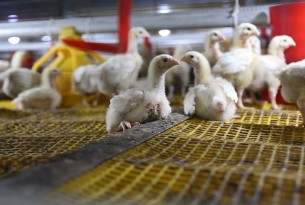