In a big win for chickens, two major food service companies—Compass Group and Aramark—have committed to improving the lives of chickens in their supply chains

But we still have more work to do to create real, lasting change for meat chickens.

50 billion. The number of animals factory farmed every year can seem too vast to comprehend; an abstract bunch of zeros.

In nearly every country, every single day, an unfathomable number of chickens, pigs, cows, and a host of other species, are being pushed to their physical and mental limits (and often beyond) to feed the world’s growing appetite for meat.

Meat chickens – the next frontier

There’s a new animal welfare battle this year - the industrial farming of chickens for their meat. Stuffed into a barren warehouse or cage with little or no natural light, bred to put on a grotesque amount of weight in just a few weeks and slaughtered while still technically a baby, a typical chicken faces a short but miserable life. And they’re suffering in secret, hidden away from public scrutiny. This is the world’s biggest animal welfare issue. Out of 60 billion chickens farmed every year for meat, 40 billion are industrially farmed.

Check out our video, which shows why these amazing animals deserve better lives:

A moment to celebrate

We were thrilled to see two major food companies—Compass Group and Aramark—commit to transforming the lives of the chickens they buy. This includes the use of slower-growing breeds, allowing birds more space to move, and the introduction of natural light and enriched environments.

These are some of the first commitments focused on meat chickens, and it sets the scene for 2017 and beyond. Both Compass Group and Aramark are reimagining their businesses, recognising that customers are calling for change. Now we must keep the pressure up as we challenge other companies to change for chickens.

Despite positive steps from companies like Compass Group and Aramark, a lot more progress needs to be made for meat chickens. That’s why, with help from our supporters, we’re working to push more companies in the right direction for animals.

The rise of industrial livestock farming has been viewed by some as an unstoppable force; in 1964, The Guardian’s agricultural correspondent, Stanley Baker, said: “[f]actory farming, whether we like it or not, has come to stay. The tide will not be held back...”.

But views like these lack imagination, failing to account for the profound rise in support for a world where animal-friendly farming is the norm, not the exception. Rather than viewing animals as inanimate spare parts on a factory line, they are increasingly seen as living, breathing, feeling beings. Instead of feeling daunted by the scale of the challenge, an unparalleled opportunity is seen to transform the lives of billions of animals.

In recent years, we’ve witnessed seismic changes in the farm animal welfare movement. The most recent battleground has been caged hens. What started out as a deeply polarised debate (some decades ago) is now a race to the top, with companies competing to move hens out of cruel cage systems. Some of the world’s biggest companies, including Nestlé, McDonald’s and Starbucks, have committed to ditch the cage for hens.

As a result of this change, millions of hens will spend their lives free from the intense confinement of a cage. There’s still room for improvement, but it’s testament to the efforts of countless individuals and organisations, including our own, who’ve poured relentless energy into the movement for a friendlier food system.

A chicken’s a chicken

With so many companies going cage-free for hens, now is the perfect time to focus on chickens raised for their meat. Because ultimately, a chicken’s a chicken; why is it wrong to treat a hen as an inanimate object, but ok when it’s a meat chicken? (there’s no good reason, of course!).

We are asking you to join us in challenging KFC to change for chickens. As an iconic, global retailer, KFC has the power to improve the lives of the millions of chickens. Sign our petition now and challenge KFC to help end the secret suffering of chickens. 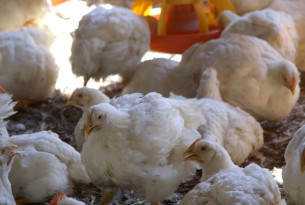