Thai Union recently announced it will slash its use of controversial ‘fish aggregating devices’ (FADs), which attract fish into one area making them easier to catch, by 50%

It will also tackle Illegal, unreported and unregulated fishing, and improve traceability of its products.

One in five cans of tuna sold around the world is produced by Thai Union.

The company is major player in the seafood industry, and with huge international influence comes a degree of social and environmental responsibility. So we welcome the news that by 2020, Thai Union will reduce use of FADs to help improve sustainability and protect sea animals.

But what does Thai Union’s commitment mean for animal welfare, conservation and our campaign to combat the issue of lost and abandoned fishing gear, known as ‘ghost gear’?

The issues that Thai Union aims to address through its new commitment are closely connected to the issue of ‘ghost gear’. We hope the company’s decision will help reduce the number of sea animals inadvertently affected by its fishing.

A FAD is a floating object used at sea by many fishing vessels. Fish are naturally attracted to floating objects so the FADs act as a beacon to hundreds of different fish species, which then gather around it.

Many thousands of FADs are deployed in our oceans each year.

The commercial fishing sector has faced criticism for its rampant use of FADs, due to the indiscriminate catching of marine species. If not retrieved, the devices are also a key contributor to the problem o ghost gear, which is a deadly threat to all kinds of sea animals. It entangles and kills animals such as seals, turtles, sea birds, and even whales.

It’s not just fishers who are interested in the fish gathered at the FADs. Animals such as turtles, seals, whales and sharks are also attracted to FADs and can become reliant on this aggregated food source. These animals also face greater risk of entanglement in the netting and other parts of the FAD.

Entanglements can limit these animals’ ability to swim and feed, often causing them to drown.

Through our work with the Global Ghost Gear Initiative to develop best practice guidance for fishing gear management FADs were also identified as the 3rd most likely gear type to contribute to ghost fishing after gillnets, pots and traps.

When FADs are lost or abandoned, they contribute to the global ghost fishing problem until they sink or wash ashore as marine debris in three main ways:

The guidance we’ve developed with the GGGI enables companies to check they are taking all necessary steps to limit the impact of this practice on the marine environment.

We’re also working on a pilot project in the Pacific to better understand the role marking, tracking and disposal of FADs can play in addressing the problem.

With FADs being used in more than 40% of the world’s tropical tuna catches, and FAD loss becoming an increasingly important issue, we welcome the commitment from Thai Union.

We look forward to seeing more companies taking this important step to address sustainability and wildlife protection in our oceans. 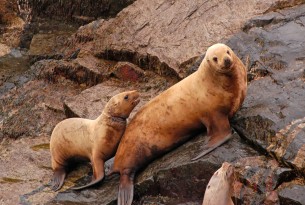